I waited for a full moon night to take this picture. The light that the full moon cast over a period of time it’s enough to illuminate this wonderful truck.  Needless to say, a tripod it’s paramount for this type of images.

Some tips here are to make sure the moon it’s out of the picture, as well as any other light sources. Otherwise we would end up with an unpleasant burned spot on the final picture.  The set up here was pretty simple. Set the camera on the tripod, attach a cable release to the camera and set the camera to manual exposure. The lens  it’s set at F5.6, ISO 100 and the speed it’s BULB. This is where you have to experiment to get the right time to match the effect your after. In this case it was between 2 1/2 to 3 1/2 min. The lens ( Canon EFS 10-22 mm ) was on manual focus, I composed the frame, and with a flash light’s aid focus where I wanted it.

Now to the lighting effect. While the camera it’s open up recording the image I was by the side of the truck with an LED flash light cover with a red gel (painting with red) for about 1 to 1 1/2 min. Make sure you keep on moving the light to avoid creating any hot spots. Other things to keep in mind when painting with light it’s to avoid pointing the light source to the lens. In this series of images a few did not worked out because of that. There was one picture were I illuminated the windshield from the inside. That created a strong reflection captured by the camera. Other thing to look for it to keep the light source (flash light) away from the frame. The camera will record a split second of direct lighting. For example. When I was done illuminating the inside of the truck I walked away with the flash light on and I left the light trail right behind me. So make sure the light source it’s off. For the head lights I did the same, get close to them (but outside the frame) point at them and illuminate them  (in this case 8 seconds) using a green gel.

Now that you have the ABC’s go out there, find a friend with a cool truck and have some fun.

As always, if you any any questions comments or like to share an image feel free to do so. 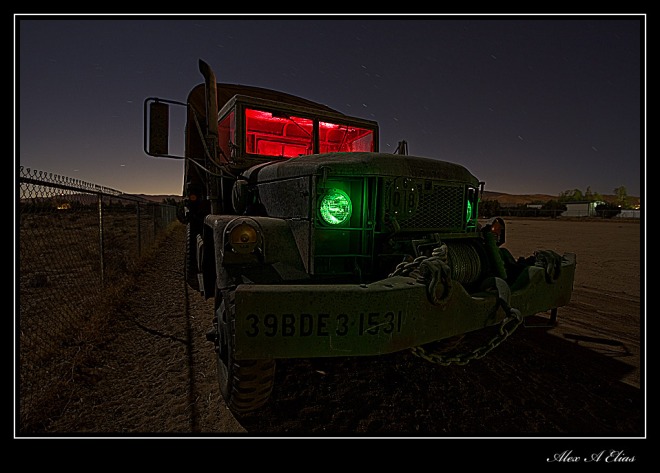 One thought on “Night photography.”

This site uses Akismet to reduce spam. Learn how your comment data is processed.